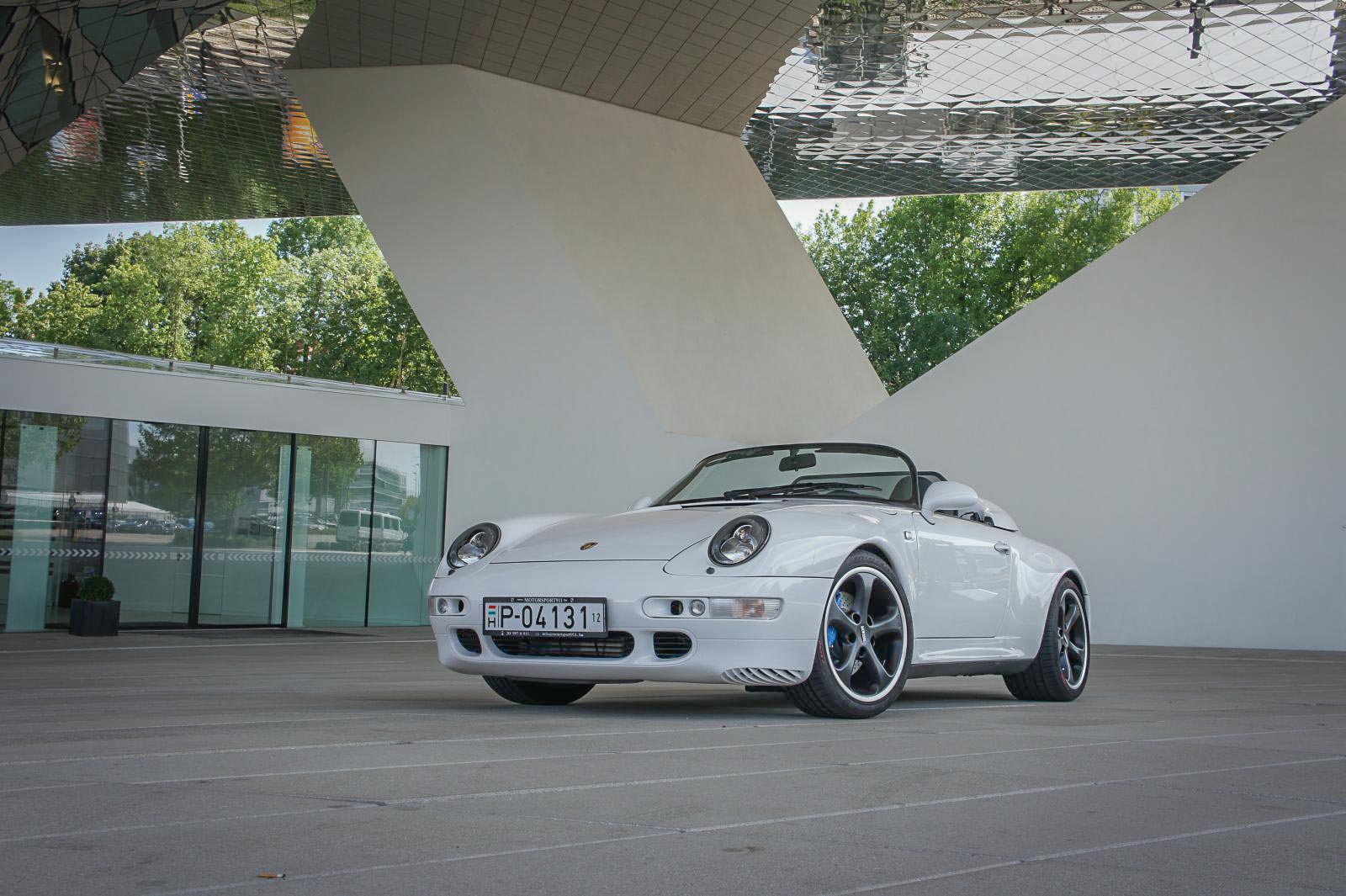 Arpad came to 9m with a desire for his own Porsche 993 Speedster. This is the result, a car he calls Speedy White, a Porsche created to his specification and Number Three in the series of 9m93 Speedster S cars we have created for owners across the world.

Based in Hungary, Arpad had already secured a donor car, a standard 993 Cabriolet with an extremely low mileage. The car had, however, been standing dormant for well over a year, so as well as the bespoke conversion to Speedster specification and associated upgrades, we also spent time re-comissioning the base car.

Speedy White is a six speed manual, Varioram car originally built to EU specification in left hand drive. Arpad remained in touch with us throughout the months spanning the creation of his car, as the process of stripping the 993, then converting the Porsche to Speedster specification and also to wide body Turbo look ’S’ specification, with the wider rear arches, was undertaken.

This time consuming and precise process also involves adding significant strengthening to the shell, as we firmly believe that the wider track and tyres will inevitably add more cornering force.

Above all, we create each 9m93 Speedster S to drive identically to a coupe model.

Each car we create in this series has it’s own, unique specification. For Arpad’s car, there’s the  benefit of a Turbo brake upgrade and revised KW Variant 3 suspension, while he chose to keep the Varioram engine as standard.

Each time we hand over a 9m Porsche to it’s owner, we are reminded of the passion that we all share for the air cooled 911. The Porsche family is quite literally global, the creation of the Number 3 car was followed widely online. 9m owners are similarly close.

The Number Two car lives in the USA. It’s owner JP, commissioned the car in Arena Red. It’s a car he calls Speed Arena. When he heard of Aprad’s project, JP took the trouble to fly in from California to be with us when Arpad collected his car from the UK.

The two 9m93 Speedster S owners then enjoyed a pan European road trip, taking time to enjoy the Porsche museum in Stuttgart, en route to the car’s home in Hungary.
Arpad asked the Porsche Museum staff for permission to park outside of the main entrance for the photos you see here.

Such was the interest in the Speedster S, he had to wait some time for the crowds to disperse before he was able to shoot.

Interest in any of the 9m93 Speedster S cars we have created is simply huge whenever they are seen in public. The team at 9m are proud to have created five of this bespoke cars for owners across the world.

With the Porsche factory bringing back the Speedster style again in the new 2019 Porsches, we are once again being asked by air cooled owners if it is possible to have a 993 Speedster S created.

If you would like to discuss commissioning a Speedster S, we would love to talk to you about your ideas on creating your own perfect 9m Porsche.